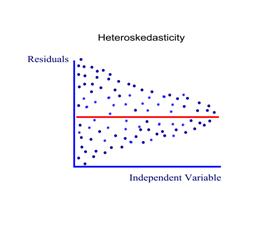 Heteroskedasticity occurs when the variance of the errors differs across observations i.e. variances are not constant.

Heteroskedasticity can be tested by Plotting residuals on a graph and judging a relationship with respect to observations on the x-axis. A more stringent measure is the Breush-Pagan Test which involves regressing the squared residuals from the estimated regression equation on the independent variables in the regression.
Test statistic = n x R2Residuals