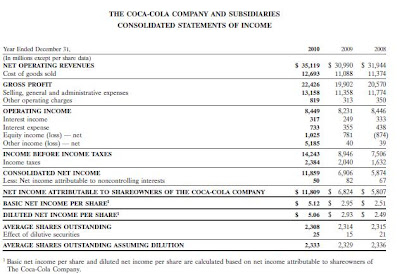 As you can see the above is the snapshot of Consolidated Income Statement of The Coca-Cola Company for year 2010. I was going through the Form 10K when I saw the statement. It immediately reminded me of my days in Bachelors when I initially used to look at the income statements in fresh accounting and used to get shocked! Looking at them today was certainly different. I mean things have started making sense.

The consolidated statement has provided past three years data yes it makes sense as they are following USGAAP. If they had followed IFRS it would have been 2 years data.

The operating income is core operational income of Coke whereas the interest income is against the fixed income security investments and interest expense could be against loans and debts etc. The Equity income is against the investments in other companies where significant influence exists while Coke does not presume control. For this reason the income is added in single line. Other income could be on realized gains in financial assets of other companies where coke could have investment < 20%, no control and/or influence. Yes it makes sense because I have just read it in Level II Reading 22.

The consolidated net income means that it is calculated by subtracting the accumulated expenses from the revenues of subsidiaries in which Coke presumes influence and control, added to Coke's operating revenues. Acquisition is less than 100% that is why non controlling or minority interest is netted.

Basic EPS is calculated followed by Diluted EPS which contains potential shares or options which could be exercised and 'dilute' the income by increasing the denominator i.e. No. of Shares. Since the diluted EPS is less than Basic EPS, analysts would consider this. Well not touched this in LII but it was thoroughly covered in LI.

What??? The Consolidated Income statement ended? NOPE the notes are still there and they would be explaining most of the items in the lines. I just went through it and narrated what was coming to my mind! More or less I think I have been able to go through it smoothly without a thought popping into my mind "Hey what does that mean???" which certainly makes me feel quite happy!